Combining art and science at the Atlanta Science Festival 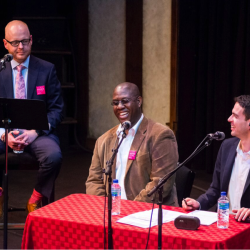 You may have noticed a little extra pink in the Atlanta streets last week. The 2016 Atlanta Science Festival has just come to a close, marking the completion of its third year. Hoping to bring non-scientists into the fold, the Center for Chemical Evolution contributed three of the weeklong science celebration's signature programs: Coded Life: Motions of Change, You're the Expert, and Story Collider.
Aerialists soared through danced depictions of computer science, intermolecular forces, and, of course, the evolution of biopolymers at Coded Life: Motions of Change. The evening was composed of three aerial dances; a panel of scientists and artists followed each. Remarkably, the scientists presenting after the first two pieces were also the ones who had choreographed and performed the dance pieces. At the beginning of her panel, Catherine Crompton was still panting and cooling off in her hand-sewn, 19th century Ada Lovelace costume. The Georgia Tech and CCE communities were well represented, with Aaron McKee, a Ph. D candidate in chemistry, discussing the intermolecular chemistry of water following a piece created and performed by Uma Nagendra that was inspired by its unusual behaviors. Christine He, a chemical engineering Ph. D candidate, presented her research, on which the polymer evolution piece was based. Even an undergraduate researcher from the Center for Chemical Evolution's 2015 REU program was part of the show; she composed and performed a string quartet for the dance piece titled "Ode to Molecular Assembly."
Audience members eagerly discussed the evening's diverse scientific content with its creators, all of whom were women.
At You're the Expert, Georgia Tech investigator, Stefan France, got put on the hot seat with host Chris Duffy. Three comedians with connections to Atlanta and such popular shows as Archer did their best to figure out what Stefan does in his lab all day and why it matters. Eventually, they managed to guess that he was a chemist who, among other things, develops innovative compounds for medicinal applications. The Center for Chemical Evolution partnered with its sister Center for Chemical Innovation in Atlanta, the CCHF, to bring this raucous event that packed the house at Shakespeare Tavern.
On the following day, the Center for Chemical Evolution brought The Story Collider to the Shakespeare Tavern for the third consecutive year. This year, the program was sponsored in partnership with Cancer Treatment Centers of America. Amanda Stockton shared her personal experience of becoming a scientist and her quest to explore distant worlds. Four other storytellers told about how science has impacted their lives.
At the Exploration Expo, the Atlanta Science Festival's grand finale, the CCE Student Leadership Council presented innovative new demonstrations focused on the origins of life. Throughout the day, graduate students and postdocs engaged with some of the 19,000 in attendance.
The Center for Chemical Evolution is proud to work with so many partners to bring science to the public. Programs like these prove that the stuff of science is not only suited to journals and laboratories, but to artistic expression and personal exploration. Science is for everyone.