The close synergy between proteins and nucleic acids in current biology suggests the possibility of a functional co-evolution between these two polymers. Along these lines, CCE scientists found that cationic proto-peptides (depsipeptides and polyesters), either produced as mixtures from plausibly prebiotic dry-down reactions or synthetically prepared in pure form, can engage in direct interactions with RNA resulting in mutual stabilization of both the proto-peptide and the RNA. Cationic proto-peptides significantly increased the thermal stability of folded RNA structures. In turn, RNA increased the lifetime of a depsipeptide by >30-fold. These CCE findings support a model in which tightly-intertwined biological dependencies of RNA and protein reflect a long co-evolutionary history that began with rudimentary, mutually-stabilizing interactions at early stages of polypeptide and nucleic acid co-existence. These results provide an alternative to the conundrum of whether nucleic acids or proteins came first, and support the possibility that nucleic acids and proteins were selected together through a process of co-evolution.

Research in the CCE has found that deliquescent minerals—salts that dissolve in water they absorb from air—can assist the oligomerization of amino acids to form peptides. Deliquescent "puddles" do not rely on rehydration by unpredictable rain events and can foster formation of peptides from the amino acid glycine to an extent that is >10-fold higher than non-deliquescent control conditions. The deliquescent mixtures tightly regulate their moisture content, which is crucial, as too little water precludes dissolution of the reactants while too much water favors hydrolysis over condensation. This research highlights that deliquescent substances could have regulated moisture content for the chemical reactions that produced essential molecules for life’s first cells. 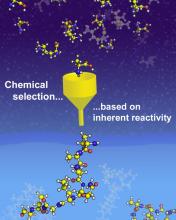 One of the long-standing questions in origins-of-life research centers on how the proteinaceous side chains and the protein backbone were selected during the earliest phases of evolution. CCE scientists studied plausibly-prebiotic oligomerization reactions of a group of positively charged amino acids, both proteinaceous and non-proteinaceous. Intriguingly, the proteinaceous amino acids oligomerized more extensively and with greater regioselectivity compared with nonproteinaceous amino acids, forming predominantly linear, protein-like backbone topologies. These findings provide a purely chemical basis for selection of the positively charged amino acids found in today’s proteins. These results support the CCE’s aims to understand the origin of modern biopolymers and provide fresh insight into the molecules on prebiotic Earth that may have helped life get started.

Previous CCE studies demonstrated the formation of polyesters through wet/dry cycles that mimic day and night or seasonal changeson the early Earth. Through cyclic iterations, CCE scientists observed the formation of longer and more complex polymer distributions. Inspired by these results, studies combining hydroxy acids and amino acids under cycling conditions were performed leading to the production of depsipeptides. Through a combination of ester-amide bond exchanged and ester bond hydrolysis, depsipeptides became enriched with amino acids over increasing cycles. These results demonstrate a plausibly prebiotic route to the formation of proto-polypeptides.