New from Stated Clearly- What is the RNA World Hypothesis? 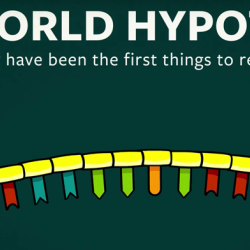 All living creatures today reproduce and evolve using a complex gene-enzyme cycle. If we look at a cell, for example, information encoded in its genes is used to produce functional proteins called enzymes. Some of those enzymes then turn around to make copies of the cell's genes, allowing the cell to reproduce.
Because the gene-enzyme system forms a closed loop, it presents us with a classic chicken or egg conundrum: Which came first, genes or the protein enzymes they code for?
While the details are still not fully worked out, discoveries over the past few decades have lead researchers to a surprising possible solution: What really came first? Genes that act as enzymes!
The RNA World Hypothesis is the idea that before living cells, the genetic code, and the gene/protein cycle ever existed, chains of a chemical called RNA were forming naturally. Once formed, some of these chains were able to function as enzymes, and were even able to evolve by making copies of themselves with slight, accidental modifications.
While there is little doubt that RNA played a crucial role in the early development of life, the complexity of RNA is casting doubt on the idea that RNA was the first truly replicating and evolving chemical system. For this reason, alternatives to the “RNA first” view are also being investigated. Most notable is a proto-RNA hypothesis being studied by the lab of Nicholas Hud, and several metabolism first hypotheses which got their start from the work of Robert Shapiro.
At this time, all serious investigations into the origin of life are being done under the overarching idea that life emerged from chemistry.